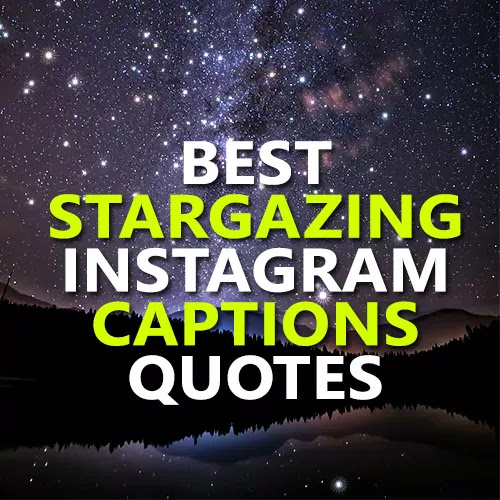 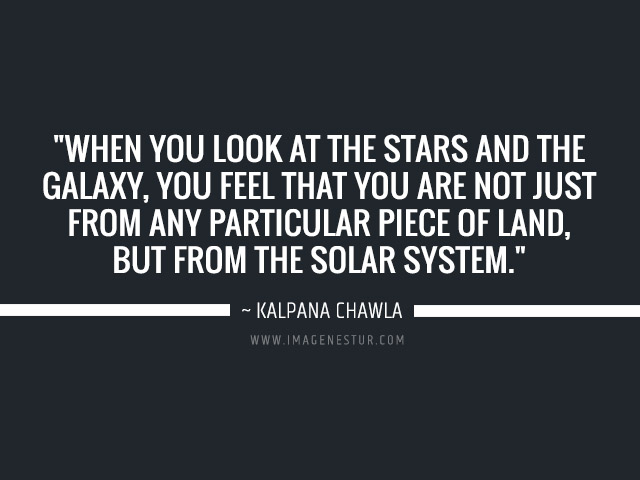 "When you look at the stars and the galaxy, you feel that you are not just from any particular piece of land, but from the solar system." ~ Kalpana Chawla

"The dinosaurs became extinct because they didn't have a space program." ~ Larry Niven

“Remember to look up at the stars and now down at your feet. Try to make sense of what you see and wonder about what makes the universe exist. Be curious. And however difficult life may seem, there is always something you can do and succeed at. It matters that you don’t just give up.” – Professor Stephen Hawking

"The Moon is essentially gray - no color - looks like plaster of paris - soft of gray sand." ~ Jim Lovell

"I'm coming back in... and it's the saddest moment of my life." ~ Edward Higgins White

"The universe is wider than our views of it." ~ Henry David Thoreau

"Maybe life is all about twirling under one of those midnight skies." -Sanober Khan

“Keep your eyes on the stars, and your feet on the ground.“– Theodore Roosevelt

"I wonder at the starry pattern in the sky. Are they little pieces of moon which want to fly?"-Munia Khan

"So let us then try to climb the mountain, not by stepping on what is below us, but to pull us up at what is above us, for my part at the stars; amen." ~ M. C. Escher

"Space is the stature of God." ~ Joseph Joubert

“It is not in the stars to hold our destiny but in ourselves.“– William Shakespeare

"Moonlight drowns out all but the brightest stars."-J. R. R. Tolkien

“A sky as pure as water bathed the stars and brought them out.“– Antoine de Saint-Exupéry

"What a beautiful night, the skies are filled with stars twinkling in the sky. What a starry starry night."-Jennifer Aquillo

"How quickly do we grow accustomed to wonders. I am reminded of the Isaac Asimov story Nightfall, about the planet where the stars were visible only once in a thousand years. So awesome was the sight that it drove men mad. We who can see the stars every night glance up casually at the cosmos and then quickly down again, searching for a Dairy Queen." ~ Roger Ebert

“For my part I know nothing with any certainty, but the sight of the stars makes me dream.“– Vincent Van Gogh

"I have loved the stars too fondly to be fearful of the night."-Vincent Van Gogh

"As the skies appear to a man, so is his mind. Some see only clouds there; some, prodigies and portents; some rarely look up at all; their heads, like the brutes,' are directed toward Earth. Some behold there serenity, purity, beauty ineffable. The world runs to see the panorama, when there is a panorama in the sky which few go to see." ~ Henry David Thoreau

“Not just beautiful, though – the stars are like the trees in the forest, alive and breathing. And they’re watching me.”-Haruki Murakami

"I saw for the first time the earth's shape. I could easily see the shores of continents, islands, great rivers, folds of the terrain, large bodies of water. The horizon is dark blue, smoothly turning to black. . . the feelings which filled me I can express with one word-joy." ~ Yuri Gagarin

"Hey, Timon, ever wonder what those sparkly dots are up there?"-Pumbaa, The Lion King

"The starry heaven, though it occurs so very frequently to our view, never fails to excite an idea of grandeur. This cannot be owing to the stars themselves, separately considered. The number is certainly the cause. The apparent disorder augments the grandeur, for the appearance of care is highly contrary to our ideas of magnificence. Besides, the stars lie in such apparent confusion, as makes it impossible on ordinary occasions to reckon them. This gives them the advantage of a sort of infinity." ~ Edmund Burke

"Cause you're a sky full of stars." -Coldplay

"Every cubic inch of space is a miracle." ~ Walt Whitman

“The stars are the land-marks of the universe.“— Sir John Frederick William Herschel, Essays from the Edinburgh and Quarterly Reviews with Addresses and Other Pieces, 1857.

"The more of us that feel the universe, the better off we will be in this world."-Neil deGrasse Tyson

"That was a real fireball." ~ John Glenn

"If humans one day become extinct from a catastrophic collision, there would be no greater tragedy in the history of life in the universe. Not because we lacked the brain power to protect ourselves but because we lacked the foresight. The dominant species that replaces us in post-apocalyptic Earth just might wonder, as they gaze upon our mounted skeletons in their natural history museums, why large headed Homo sapiens fared no better than the proverbially peabrained dinosaurs." ~ Neil deGrasse Tyson

“New stars offer to the mind a phenomenon more surprising, and less explicable, than almost any other in the science of astronomy.“– George Adams

"If you want to see a shooting star, you might have to spend a lot of nights looking up." -Cynthia Lewis

"I am watching the Earth. The visibility is good. I feel well and cheerful. The machine is functioning normally." ~ Yuri Gagarin

"What struck me most was the silence. It was a great silence, unlike any I have encountered on Earth, so vast and deep that I began to hear my own body: my heart beating, my blood vessels pulsing, even the rustle of my muscles moving over each other seemed audible. There were more stars in the sky than I had expected. The sky was deep black, yet at the same time bright with sunlight." ~ Alexey Leonov

"Keep your eyes on the stars, and your feet on the ground."-Theodore Roosevelt

“Each star is a mirror reflecting the truth inside you.“– Aberjhani

"The humblest star twinkles most in the darkest night."-Johann Kaspar Lavater

“Look at the stars. See their beauty. And in that beauty, see yourself.“– Draya Mooney

"This brief century of ours is arguably the most significant one in the history of our universe. We'll have the technology either to self-destruct, or [to] seed our cosmos with life. The situation is so unstable that I doubt we can dwell at this fork in the road for more than another hundred years. But if we end up going the life route instead of the death route, then in a distant future our cosmos will be teaming with life, all of which can be traced back to what we do-here and now. I don't know how we'll be thought of, but I'm sure that we won't be remembered as insignificant." ~ Max Tegmark

"I know nothing with any certainty but the sight of the stars makes me dream." -Vincent Van Gogh

“Maybe that’s what life is… a wink of the eye and winking stars.“ – Jack Kerouac

"I think it's going to be great if people can buy a ticket to fly up and see black sky and the stars. I'd like to do it myself-but probably after it has flown a serious number of times first!" ~ Paul Allen

"If you want to have a program for moving out into the universe, you have to think in centuries not in decades." ~ Freeman Dyson

“Moonlight drowns out all but the brightest stars.“ – J.R.R. Tolkien, The Lord of the Rings

"Space-ships and time machines are no escape from the human condition. Let Othello subject Desdemona to a lie-detector test; his jealousy will still blind him to the evidence. Let Oedipus triumph over gravity; he won't triumph over his fate." ~ Arthur Koestler

"The sky is the ultimate art gallery just above us." ~ Ralph Waldo Emerson

“We have calcium in our bones, iron in our veins, carbon in our souls, and nitrogen in our brains. 93% stardust, with souls made of flames, we are all just stars that have peoples names.“— Nikita Gill

"I love to revel in philosophical matters-especially astronomy. I study astronomy more than any other foolishness there is. I am a perfect slave to it. I am at it all the time. I have got more smoked glass than clothes. I am as familiar with the stars as the comets are. I know all the facts and figures and have all the knowledge there is concerning them. I yelp astronomy like a sun-dog, and paw the constellations like Ursa Major." ~ Mark Twain

"If people looked at the stars each night, they'd live a lot differently. When you look into infinity, you realize that there are more important things than what people do all day." ~ Bill Watterson

“I have loved the stars too fondly to be fearful of the night.” — Sarah William

"Space, the final frontier. These are the voyages of the starship Enterprise. Its five-year mission: to explore strange new worlds, to seek out new life and new civilizations, to boldly go where no man has gone before." ~ Gene Roddenberry

"No sight is more provocative of awe than is the night sky." ~ Llewelyn Powys

“There wouldn’t be a sky full of stars if we were all meant to wish on the same one.” – Frances Clark

"The Soviet Union has become the seacoast of the universe." ~ Sergei Korolev

"For my part I know nothing with any certainty, but the sight of the stars makes me dream." ~ Vincent Van Gogh

“Only in the darkness can you see the stars.”— Martin Luther King Jr.

"Father, we thank you, especially for letting me fly this flight - for the privilege of being able to be in this position, to be in this wondrous place, seeing all these many startling, wonderful things that you have created." ~ Gordon Cooper

"If people sat outside and looked at the stars each night, I'll bet they'd live a lot differently." ~ Bill Watterson

“It shows you exactly how a star is formed; nothing else can be so pretty! A cluster of vapor, the cream of the milky way, a sort of celestial cheese, churned into light.” — Benjamin Disraeli, Tancred, 1847.

"Our only chance of long-term survival is not to remain lurking on planet Earth, but to spread out into space." ~ Stephen Hawking

"Stargazing is one of the most profoundly human things one can do. But perhaps we must more frequently tear ourselves away from the mystery and beauty of the starry heavens above, and rather inspect, admire and foster the moral law within." ~ Jack Gleeson

“May all the stars hang bright above her dwelling, Silent as though they watched the sleeping earth!” — Samuel Taylor Coleridge, Dejection: An Ode, 4 April 1802.

"Unknowingly, we plow the dust of stars, blown about us by the wind, and drink the universe in a glass of rain." ~ Ihab Hassan

"In order for us to use the very best judgment possible in spending the taxpayer's money intelligently, we just have to do a certain amount of this research and development work ourselves. We just have to keep our own hands dirty to command the professional respect of the contractor personnel engaged with actual design, shop and testing work." ~ Wernher von Braun

Thanks for reading this article on StarGazing Captions and Quotes for Instagram.